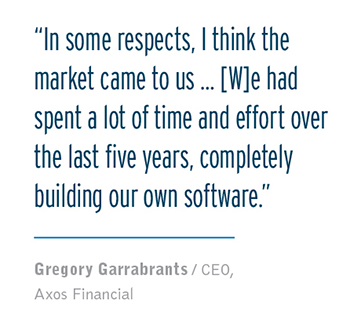 Few banks were as well positioned as Axos Financial to compete for business during the pandemic, an environment that forced customers to interact digitally.

“In some respects, I think the market came to us,” says Gregory Garrabrants, CEO of the Las Vegas-based, $14.9 billion institution. Axos — formerly Bank of Internet — was one of the first web-based banks when it launched in 2000, and it’s continued to evolve along with the digital world. “[W]e had spent a lot of time and effort over the last five years, completely building our own software,” he explains.

In addition to quickly reacting to the needs of small business customers during the crisis — Garrabrants says that Axos quadrupled the number of small business accounts opened as a result — the bank was able to respond to the high demand for mortgage refinancing in the low rate environment. The process is fully digitized. “We’ve done a lot to automate that process; we had that very well constructed.”

Leveraging 2020’s mortgage boom proved common ground among the top three small regional banks — institutions between $5 billion and $15 billion in assets. Each has put their unique spin on it.

“These banks have demonstrated an ability to be good at [what they do],” says Kara Baldwin, a partner at Crowe LLP. “Whether it’s being unique or being a traditional bank, they’re consistently good at it.”

Bank Director selected the top 10 banks in each peer group based on several metrics provided by S&P Global Market Intelligence as of year-end 2020. A profitability score was calculated based on return on average assets (ROAA) and return on average equity (ROAE); those two metrics received a double weight. A growth score examined year-over-year growth in PPNR, which was also ranked to provide a balance against growth from a low base. Credit quality was examined, based on net charge offs and nonperforming loans as a percentage of total loans. Five-year total shareholder return (TSR), from 2015 to 2020, was also ranked to acknowledge building long-term value.

Once the top 10 were selected, Bank Director studied each bank further for its performance in the four subcategories that contribute to overall performance: leadership, board, innovation and growth. (The methodologies about each specific subcategory can be found later in this report.) Each institution’s within-peer rank for these categories was factored into the final scoring, with the growth category receiving double weight due to its potential to drive future earnings.

Axos outperformed its peers in the innovation category, where it ranked eighth overall. Its performance was also buoyed by a strong ROAE, at 16.93%.

In addition to consumer and business banking, Axos has been building its capabilities in the securities space to further its positioning as a one-stop digital shop for financial services. It’s also working with independent financial advisors nationwide, allowing them to white label the bank’s technology. “We’re essentially taking our consumer technology, and we’re modifying it to be B2B,” says Garrabrants.

Merchants Bancorp ranked first in the category due to strong PPNR growth, at 141.25% year-over-year. The $11 billion bank was also the most profitable in the category, with 2.12% ROAA and 25.09% ROAE. Merchants also topped its peers for its growth strategy, ranking fourth overall in that category.

Merchants “tends to fly under the radar because of its size, but they have done an excellent job over time,” says Scott Siefers, managing director at Piper Sandler Cos. Aside from traditional banking operations, Merchants specializes in multifamily and mortgage warehouse lending, both on a national scale. “If they see an opportunity to make money in a prudent fashion, they’re not afraid to go after it,” he says. “It’s a very entrepreneurial spirit.”

First Financial Bankshares, at third, scored best in the group for TSR, at 160.8% over the five-year period we examined. The $12.5 billion bank also rated well for ROAA, at 1.98%.

The Bancorp, based in Wilmington, Delaware, with $6.3 billion in assets, and $7.7 billion First Foundation, headquartered in Dallas, tied for fourth. First Foundation also rated well for ROAE, at 13.14%, and scored well for its high PPNR growth, at 51.33%. The Bancorp boasted the second-highest TSR, at 114.29%, and also rated well for ROAE, at 15.08%. The Bancorp earns much of its income through its payments division that includes prepaid cards, and has carved out a niche working with fintech companies such as Chime.